Thank you for signing up to get your very own Expedition Nai Toolkit! You should be receiving an email from diy@campnai.org in your inbox shortly.

If you did not receive an email from us or if you have any questions, comments or concerns, feel free to email us at diy@campnai.org! Happy playing! Camp Nai Nai Nai is for anyone ages 21-39 who wants to experience the joy, beauty, and silliness of Jewish summer camp! We invite you to come as you are and find your most authentic self. Whether you are Reform, Conservative, Orthodox, just Jewish, “Jew-ish”, all of the above, or none of above, Camp Nai Nai Nai is where we sing the wrong words to the right songs, together making up our own lyrics and rules as we go along! Everyone can sing along to the “Nai Nai Nai…” part of the song.

Camp Nai Nai Nai is an inclusive space for people of all sexual orientations, ethnicities, races, genders, colors, religious creeds and accessibility needs. Everyone is welcome.

In order to make Camp Nai Nai Nai the safest and most awesome experience for everyone, all campers, staff, and contractors are required to be fully vaccinated to participate, providing proof of completed vaccination at least 14 days prior to camp, AND must also show proof of a negative PCR Covid-19 test taken within 96 hours of arrival to camp. With these measures in place, once we are in the Camp Nai “bubble” we will be able to enjoy camp life to the fullest without social distancing or a mask requirement.

We recognize that returning to large social events can be jarring and we want you to feel comfortable, so we’ve taken a few extra steps to ensure that.

Where Can I Submit My Proof of Vaccination?

Who Sees My Proof of Vaccination?

Your privacy is of the utmost importance to us. Your proof of vaccination will be verified by the Moishe House Camp Coordinator and transferred confidentially to the Moishe House Risk Manager. These will be kept on file in Risk Management only; all other copies will be destroyed.

Camp Nai Nai Nai is a three-day choose your own adventure experience, starting on Friday afternoon at 2:00 PM and ending on Sunday afternoon at 1:30 PM. The program combines camp-wide community moments with lots of activity options for you to find the vibe that suits you.

Friday you will be welcomed with an array of activities to help you get settled in, you will meet with your “mishpacha (family)” group (your camp new camp besties and your dedicated camp counselor), enjoy a beautiful Shabbat dinner, and choose one of multiple options to welcome Shabbat. In the evening we’ll have all sorts of late Nai-ght options, including song sessions by the campfire, games, and more. Throughout Saturday, we’ll offer a variety of creative “play-shops” (because there’s no “work” at Camp) where you can pursue your interests, indulge your curiosity, and try something new. The Saturday night Camp Dance is a staple, as is the Color War on Sunday morning. Many surprises, large and small, will be in store along the way.

Below is a small sample of the many, many activities from camp east:

If you prefer to fly solo (because let’s be honest the social anxiety is real) you have the option of upgrading to a Private Room and you will not have a roommate. A private room with a private bathroom will be all yours.

In TX you can stay in a two-person semi private room. Each semi private room has two twin beds and a private bathroom. If you have a preferred roommate, and you indicate one another on the registration form, you will be placed together. If you do not request a specific roommate, or do not match with your request, one will be assigned to you – and hopefully will become your camp bestie! In TX you can stay in a three-person cabin. Each cabin room has 6-14 bunk beds and a shared bathroom. If you have a preferred roommate, and you indicate one another on the registration form, you will be placed together. If you do not request a specific roommate, or do not match with your request, one will be assigned to you – and hopefully will become your camp bestie!

If you would like to use a cabin for your group greater than three people register everyone for a cabin purchase then email info@campnainainai.org.

Wondering what you should bring to camp? Here is our Packing List for Camp Texas.

Please note the weather this time of year will be in the 60’s to 70’s and be chilly in the evenings. Each room and cabin has AC and Heat. This won’t be your typical camp food! Our camp chefs work hard to create menus that are filled with healthy, diverse menus that are super tasty to boot! We’ll have meals that are a twist on old camp classics, but with upgrades for our adult palettes.

At Camp Nai Nai Nai Texas all meals and snacks are Kosher-Style (no milk and meat together). Our culinary team will work with each camper to ensure that any dietary restrictions are accounted for. Gluten-free? Strict Kosher? Vegan? Vegetarian? Other? No problem. Not so great with dairy? You’ll be great with the options at camp! You’ll have the opportunity to indicate your dietary restrictions when completing your registration form and if we have any questions for you, we’ll be in touch ahead of camp so we can make sure you’re well taken care of during the weekend. Camp Counselors help you figure out the ins and outs of camp, introduce you to fellow campers through wacky games, lead activities during the day, and make sure you’re having an amazing time at night. Our counselors are active members of their own local Jewish communities as Moishe House residents so when you’re back from camp you’ll have ample opportunities to stay in touch!

Camp Specialists are outstanding Jewish educators who come from all over the country to lead our activities and programs, using their unique passion (be it dance, art, theater science, singing, or yoga) to explore Jewish identity, build Jewish community, and demonstrate that there are many ways to NAI!

Greg is the Director of Camp Nai Nai Nai, Moishe House’s summer camp for Jewish adults. Prior to joining Moishe house, Greg was an Assistant Director with URJ Eisner and Crane Lake Camps, and Founding Director of 6 Points Sci-Tech Academy (he actually built the camp/program from scratch!). Greg also served as the Executive Director of a synagogue in Denver. He has a great deal of experience with traditional Jewish sleepaway camps, working with youth and teens, and loves extending this work to Jewish folks in the next phase of life!

Greg is very happy to be back on the east coast, though he does miss the west coast skiing.  Greg holds a BA in Public Communications and Voice from American University, and an MPA in Non-Profit Management from CUNY-Baruch College. Greg grew up on Long Island and now lives in White Plains, NY with his wife Ali.

Elina is the Program Coordinator for Camp Nai Nai Nai. Before joining Moishe House, Elina worked for the Jewish Federation of Greater Charlotte as their Jewish/Israel Education Coordinator. Elina is an alumni of Charlotte’s Bernstein Leadership Program and is actively engaged in Charlotte’s Jewish Community. Elina was born in Uzbekistan, Tashkent.In 2003 she immigrated with her family to Augsburg, Germany. In the 13 years that Elina has lived in Germany, she worked as the Program Director for the Bavarian region (Lehava Project), Young Professional Summer Camp Assistant Director at the Jewish Cultural Welfare Office and as the Post Taglit Conventions Programming Assistant for the Jewish Agency for Israel. Elina has also worked at every Jewish Community she lived in (Augsburg, Leipzig and Nuremberg) because she believed that being actively engaged and supporting the Jewish communities will benefit the future Jewish generations. Elina moved 5 years ago to Charlotte, NC and has called Charlotte her home since then.

Outside of work Elina loves to travel, dance, and spend time with her 2 children.

Camp Nai Nai Nai TX is based at Greene Family Camp in Bruceville, TX. Though you’re close to the outside world, sprawling open fields, and starry skies will fool you otherwise.

Arrival and check-in at camp is on Friday 2:00-4:00 PM. Don’t be late – once everyone arrives, we’ll be closing the camp gate for the weekend! On Sunday, campers can expect to depart from camp at around 1:30 PM. Transportation is not included in the registration cost but below are several great options! 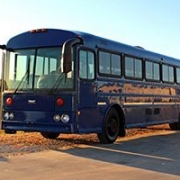 Ride to camp in style on one of our camp buses. Kick back and relax for a stress-free ride to camp, or start the party early and get to know your fellow campers en route to camp. Buses will be provided from three departure points:

Confirmation of all meeting points and specific instructions will be sent directly to travelers in advance of camp. Times and locations are subject to change. 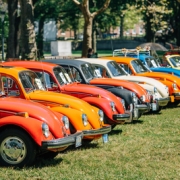 If you prefer to drive with friends or want flexibility in timing, grab yourself a parking pass! Parking is limited, so all parking passes must be purchased prior to camp. If you do not purchase your parking pass and show up to camp without one, we cannot guarantee parking will be available or you will have to pay an additional fee for last minute parking. Please do not drive to camp without purchasing a parking pass for your car. Need a ride or have a few empty seats in your car? We’ll send out a ride-sharing document prior to camp to help campers share the journey. Plus, you’ll help contribute to an environmentally friendly experience by limiting the number of cars on the road and lessening our carbon-footprint.

The cost of registration for Camp Nai Nai Nai is heavily subsidized thanks to the generous support of the Maimonides Fund, with ticket prices starting at just $300 while the true cost is close to $1,000 per camper. Nevertheless, we recognize that this subsidized rate may not be affordable for everyone. Camp Nai Nai Nai is committed to Diversity, Equity, and Inclusion – ensuring that we are a community and space that is accessible and welcoming to everyone. Regardless of one’s background, everyone should be able to experience a time away from your daily life where what you do for a living doesn’t define you and spontaneous adventures await! If you are unable to pay full price for Camp Nai admission, a scholarship fund is available to help cover the cost.

Please fill out the following form to help us determine your eligibility for a camp scholarship.

Brought to you by: Founded in 2006, Moishe House started when four Jewish 20-somethings began hosting Shabbat dinners in Oakland, California, for their friends and networks. Through the support of several early funders and a snowballing interest from Jewish communities, we have become a global leader of Jewish life for young adults. Our model trains, supports and empowers these leaders as they create meaningful experiences in their local communities for themselves and their peers by engaging 60,000+ unique participants in 25+ countries on an annual basis.

*Campers have until November 1st, 2021 to submit proof of vaccination.* Upgrade to a room all to yourself for added privacy. Indicate a preferred roommate or we’ll assign one to you. 3 people+ in a cabin sharing a bathroom with 3 other people (1 in your cabin, 2 from another). Camp Nai is powered by Moishe House
Scroll to top